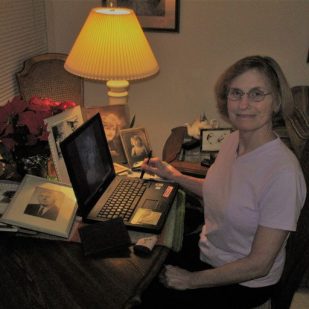 Photo:  Diana (2007) on a mission!
“I started work on the family history over ten years ago. It was a great story that kept getting better and better as distant family members jumped in with their photographs and stories. “

Family History of a Doctor’s Daughter 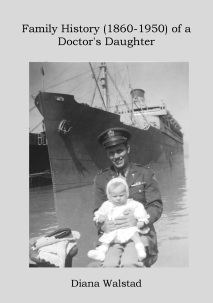 Book available with purchase of ‘Ecology of the Planted Aquarium.’ Click Here

“In this book, Walstad uses a remarkable array of sources, including diaries, interviews, and family photos, to vividly portray her people, piecing together not only a family chronicle but also a timely social history of the immigration experiment.”  — Kirkus Reviews

“The writing and the research that went into the stories are not only exemplary in my opinion, but also courageous. The psychological insights and sensitivity with which they are conveyed are equally so. The stories of Lambert, Rose, Margie and Bev, Anna, Christine and others are poignant, fascinating and compelling.” —ROGER SPENCER, M.D., Professor of Psychiatry, School of Medicine, Univ. of North Carolina (Chapel Hill)

“This book showcases one family that is both wholly unique and also emblematic of so many families in America. … The book is well researched, including copious end notes, which is quite an uncommon accomplishment in a family history. The author does an excellent job of examining her family and showing their place in a broader history, offering just enough background for each historical event and era to give context to the main focus: her family. This book is a compelling read and an excellent roadmap to the genre for other experienced or aspiring family historians.” — Judge, 25th Annual Writer’s Digest Self-Published Book Awards

Chapter 1 [Immigrants (1860-1890), 38 pages] describes the 19th century emigration of Diana’s eight great-grandparents from Norway, Denmark, Sweden and Holland.  Forces driving their migration were not just economic.  Johanna was looking for a husband.  Her brother Peter was fleeing Danish authorities after fathering an illegitimate child.

Photo:  Norwegians John and Maren Walstad married in May of 1869.  Maren was 4 months pregnant at the time, a scandalous fact that the religious-minded Walstads tried to cover up.

Chapter 2 (Settling In, 34 pages) describes the late 19th Century adjustments of Diana’s ancestors to America. Alcoholism destroys John Walstad, sending his family into grinding poverty and social isolation on the Nebraska prairies. George Johnson succeeds at his construction job, but his long-dormant TB rears its ugly head. Lambertus finally gets the happy family that eluded him in the Netherlands.

Photo (1902) shows the Danish side of family, the Johnsons.  The little girl resting her cheek against her father’s is my grandmother Rose. 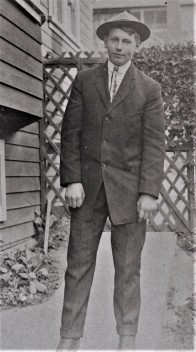 Chapter 3 (Early 20th Century, 31 pages) launches with my Swedish grandmother Hilma, a very independent woman for her time, traveling across the wind-swept Midwestern prairies as a guitar-toting missionary.  There, she meets Oscar Walstad, a 40-year-old “tent preacher” and son of the sorry John Walstad.  Meanwhile, enterprising teenager Lambert Vandenberg, son of Dutch immigrants, steam ships to Burma (Myanmar) to work its oil fields.  Upon arrival in Burma, this naïve teenager learns from older oilmen the true meaning of a “sleeping dictionary.” Johanna’s tomboyish daughter Rose romps with fellow teens in the beaches and foothills near Los Angeles.

Photo (ca. 1913) taken about 3 years before Lambert Vandenberg, my grandfather, headed out to Asia as a 17-year-old to work in Burma’s oilfields.  He was underage for the job, but being a tall, big-framed fellow with good machinist skills, he upped his age 3 years and got the job.

Chapter 4 (The 1920s, 33 pages) documents the perils of child-bearing when Rose’s older sister Martha Whitchurch almost dies giving birth. Rose and Lambert Vandenberg start their married life in the sunny prosperity of Los Angeles in the 1920s. Meanwhile out in the cold Midwest, Oscar and Hilma Walstad struggle to make ends meet on a tent preacher’s salary. Rose dies tragically from TB at age 26, leaving two little girls, Margie (my mother) and Bev. When Bev is adopted by the Whitchurches, it creates tension in the family and emotional problems for the biological daughter.

Photo (1926) Margie (l.) and Bev visiting their mother Rose at a TB sanitarium in Tujunga, California. Four months later, Rose would be dead from TB.

Chapter 5 (The 1930s, 21 pages) reveals the dysfunction in the Whitchurch family through the eyes of their very unhappy daughter Barbara. Margie has trouble accepting Lambert’s second wife Anna as her stepmother. Two years into the marriage, Anna becomes pregnant and tragically comes down with TB. From humble beginnings, Paul Walstad takes on familial responsibility—and with the help of the military—works his way through medical school.

Photo (1934): Paul Walstad (age 19) at work for the Civilian Conservation Corps (CCC) to help support his mother and siblings during the Great Depression.

Chapter 6 (Whitchurch Children Grow Up, 12 pages) continues the story of the three Whitchurch children living in San Francisco. Bev, who had easily won Martha’s affection, continues her smooth pathway through life. In contrast, rebels Barbara and Charles struggle as young adults. Barbara recounts the often humorous incidents between her mother Martha and her grandmother Johanna, revealing the women’s steely personalities and nettlesome relationships.

Photo (1940s) Barbara eventually made peace with her mother Martha Whitchurch, but I believe this photo captures the emotional scars.

Chapter 7 (Margie and Nursing, 15 pages) Anna’s death from TB after a decade-long battle releases pent-up fury from her mother Christine towards Lambert and Margie. She blames them for her daughter’s death. Margie begins dating and describes her experiences as a student nurse.

Historical Topics: The discovery of drugs (e.g., streptomycin, PAS, isoniazid) that could, for the first time, actually cure TB; the Crimean War (1853-1856) and the deplorable medical treatment of British soldiers; Florence Nightingale, heroine of the Crimean War, makes nursing an acceptable profession for young women

Photo: Margie (1942), student nurse, on the dorm roof of the Good Samaritan Hospital in Los Angeles.

Chapter 8 (Paul and Army Medicine, 23 pages) Margie marries Paul Walstad, a handsome intern at her hospital. Their marital happiness is interrupted when Paul is sent abroad for military service in July of 1945. (While Germany had surrendered, the Japanese were still fighting and America had troops in China.) Lt. Paul Walstad rides in an army convoy along the Burma Road into the rural backwaters of China where he provides medical care for U.S. soldiers. A Chinese immigrant describes his family’s hardship following the 1937 Japanese invasion of China.

Historical Topics: America’s alliance with China against Japan during World War II; the 1937 Japanese invasion of China; the sorry state of most Chinese people and the Chinese army’s abuse of its soldiers; Florence Nightingale uses the new science of statistics to prove that better treatment of British soldiers is cost-effective.

Chapter 9 (Australian War Brides, 7 pages) Lt. Paul Walstad is assigned the position of Transport Surgeon for the SS Monterey. His job is to care for ~700 “war brides” and babies taking the long sea journey from Australia and New Zealand to America. He finds dealing with sea sick children, baby formula requirements, and a suicidal woman daunting tasks. Meanwhile in San Francisco, his wife Marge and newly born daughter Diana await his return. ‘Epilogue’ gives a final salute to Diana’s ancestors.

Photo (June 1946): Lt. Paul Walstad with daughter Diana at a San Francisco dock with his ship the SS Monterey in the background.